Australian women taking up free genetic testing for breast cancer genes, announced by the Commonwealth Government last week, should be made aware of their breast reconstruction options ahead of any surgery to prevent cancer says the Australian Society of Plastic Surgeons.

“As a consequence of the Government’s announcement that it would make testing for the BRCA 1 and 2 genes freely available to those at risk we anticipate many more women will be tested and a percentage of those found to be carrying the gene will choose to undergo a preventative mastectomy, or removal of breasts, to reduce the risk of cancer,” says Professor Mark Ashton, President of the Australian Society of Plastic Surgeons in conjunction with Breast Reconstruction Awareness Day.

“We want to ensure women considering a preventative mastectomy, as well as those undergoing a mastectomy after a cancer diagnosis, are aware there are a range of different types of reconstruction options available to them (that may include implants and /or transfer of a woman’s own skin and tissue), and the fact the reconstruction can be performed at the same time as the mastectomy,” says Professor Ashton.

Specialist Plastic Surgeons have training and expertise in the full range of reconstructive options. While breast implants are the most commonly chosen method it is important for women to find out the pros and cons of each type of reconstruction.

This is especially true in light of new information on a rare type of blood cancer that can occur in the presence of some implants, Breast Implant Associated Anaplastic Large Cell Lymphoma (BIA-ALCL).

Although this implant associated cancer is very rare, and very treatable if detected early, it is still important to have all of the risks explained in full. Some women chose to have transfer of tissue from elsewhere in the body rather than implants.

“We also encourage women planning to undergo a reconstruction with implants to speak to their surgeon about being included on the Australian Breast Device Registry (ABDR) which identifies and reports on any trends or complications associated with these devices and helps improve patient safety, particularly in the event of a product recall.”

“The most important thing is that women are informed of all their options and are fully engaged in the decision making around their reconstruction.”

A recent qualitative survey of 141 breast cancer survivors1 found one in four women felt they did not have enough information about reconstruction prior to their surgery. This is despite recommendations from the Cancer Council for all women to be fully informed of their breast reconstruction options prior to a mastectomy as part of best clinical practice guidelines.

“It is simply not good enough that there are many Australian women diagnosed with breast cancer who are still not fully informed of their reconstruction options,” says Professor Ashton.

“We understand that a breast reconstruction is a very personal decision and some women will decide that it’s not for them. However, it is critical for these women, and their families, that they have access to accurate and unbiased information and that a simple lack of awareness is not an obstacle to having a reconstruction,” says Professor Ashton.

“We see this as an important women’s health issue that should be considered a crucial part of breast cancer treatment for those who desire it. A cancer diagnosis is confronting and many women report a mastectomy can lead to a sense of ‘loss of self’. Women should be offered every opportunity to reclaim their bodies and self-confidence.”

In conjunction with Breast Reconstruction Awareness Day (BRA Day) the Australian Society of Plastic Surgeons is making a free, downloadable booklet available on its website for women and their families wanting to know more about breast reconstruction.

What is BRA Day?

BRA Day began in Canada to promote education, awareness and access for women who may want to consider a post-mastectomy breast reconstruction. Since then, other countries including the United States, New Zealand, and, since 2013 Australia have taken up the challenge, proudly supported by the Australian Society of Plastic Surgeons.

Why do we need a BRA Day in Australia?

Australia has very low rates of reconstruction compared with other first-world countries. Only an estimated 20% of Australian women who have a mastectomy go on to have a reconstruction. This compares with about 50% of American women. The Australian Society of Plastic Surgeons believes the low rates point to a lack of awareness of what is involved and the procedure itself, as well as lack of support services in regional, rural and remote populations. BRA Day aims to raise sufficient awareness to ensure all women, no matter where they live in Australia, have the same access to information and the same options to choose from post-mastectomy.

To download a free Guide to Breast Reconstruction, visit www.plasticsurgery.org.au 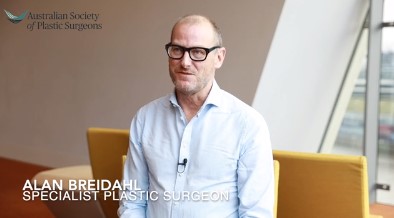 Alan Breidahl – Why did you want to become a Plastic Surgeon?